Common to both notations is that neither any colour nor the thickness or style of lines is relevant for the notation. Those effects can be used to highlight certain aspects of a figure.

Depending on their NodeClass Nodesare represented by different graphical forms as defined in Table C.1.

Table C.1– Notation of Nodes depending on the NodeClass

Referencesare represented as lines between Nodesas exemplified in Figure C.1. Those lines can vary in their form. They do not have to connect the Nodeswith a straight line; they can have angles, arches, etc.

Table C.2defines how symmetric and asymmetric Referencesare represented in general, and also defines shortcuts for some ReferenceTypes. Although it is recommended to use those shortcuts, it is not required. Thus, instead of using the shortcut, the generic solution can also be used.

Table C.2– Simple Notation of Nodes depending on the NodeClass

In the extended notation some additional concepts are introduced. It is allowed only to use some of those concepts on elements of a figure.

The following rules define some special handling of structures.

Figure C.2– Example of using a TypeDefinition inside a Node

To display Attributesof a Nodeadditional text can be put inside the form representing the Nodeunder the text representing the DisplayName. The DisplayNameand the text describing the Attributeshave to be separated using a horizontal line. Each Attributehas to be set into a new text line. Each text line shall contain the Attributename followed by an “=” and the value of the Attribute. On top of the first text line containing an Attributeshall be a text line containing the underlined text “Attribute”. It is not required to expose all Attributesof a Node. It is allowed to show only a subset of Attributes. If an optional Attributeis not provided, the Attributecan be marked by a strike-through line, for example “Description”. Examples of exposing Attributesare shown in Figure C.3.

To avoid too many Nodesin a figure it is allowed to expose Propertiesinside a Node, similar to Attributes. Therefore, the text field used for exposing Attributesis extended. Under the last text line containing an Attributea new text line containing the underlined text “Property” has to be added. If no Attributeis provided, the text has to start with this text line. After this text line, each new text line shall contain a Property, starting with the BrowseNameof the Propertyfollowed by “=” and the value of the Value Attributeof the Property. Figure C.4shows some examples exposing Propertiesinline. It is allowed to expose some Propertiesof a Nodeinline, and other Propertiesas Nodes. It is not allowed to show a Propertyinline as well as an additional Node. 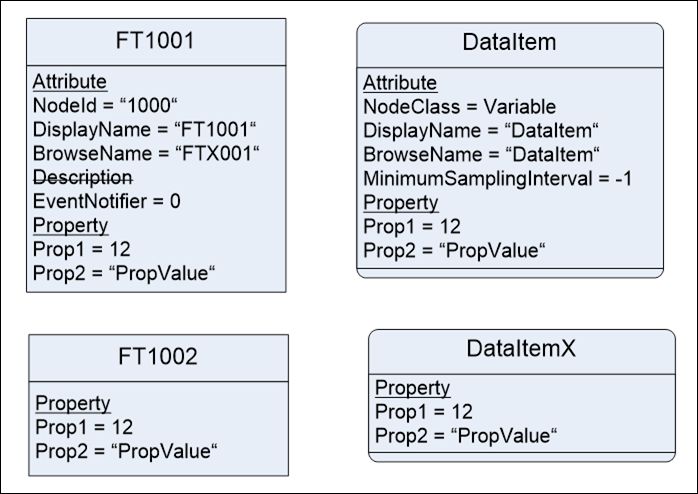 It is allowed to add additional information to a figure using the graphical representation, for example callouts.