A.2 DomainDownload Program
A.2.1 General

The Clientuses the “DomainDownload” Program to manage and monitor the download of a domain at the Server. 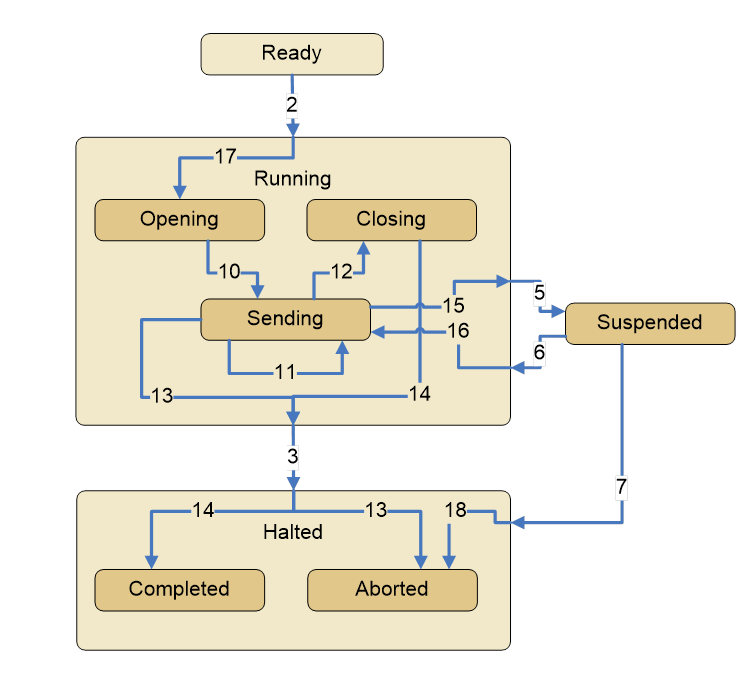 Table A.1 also specifies the defined states, causes for the transitions, and the effects of each transition. Program Control Methodsare used by the Clientto “run” the DomainDownload. The Methodscause or trigger the specified transitions. The transition effects are the specified EventTypeswhich notify the Clientof Programactivity.

Four standard Program Methodsare specified for running the DomainDownload Program, Start, Suspend, Resume, and Halt. No additional Methods are specified. Thebase behaviours of these Methods are defined by theProgramStateMachineType. The Start Methodinitiates the download activity and passes the source and destination locations for the transfer. The Suspend Methodis used to pause the activity temporarily. The Resume Methodreinitiates the download, when paused. The Halt Methodaborts the download. Each of the Methods causes a Programstate transition and a substate transition. The specific state transition depends on the current state at the time the Methodis called. If a Method Callis made when the DomainDownload is in a state for which that Method has no associated transition, the Methodreturns an error status indicating invalid state for the Method.

The Start Methodspecifies three input arguments to be passed when it is called: Domain Name, DomainSource, and DomainDestination. The other Methodsrequire no input arguments. No output arguments are specified for the DomainDownload Methods. The resultant error status for the Programis part of theCall Service.

The SendingToSending Programtransition Eventrelays intermediate result data to the Clientalong with the notification. Each time the transition occurs, data items describing the amount and percentage of data transferred are sent to the Client.

The DomainDownload Programretains final result data following a completed or aborted download. The data includes the total transaction time and the size of the domain. In the event of an aborted download, the reason for the termination is retained.

The UA model for the DomainDownload Programis presented in Clause A.2.6.2. Collectively they define the components that constitute this Program. For clarity, the figures present a progression of portions of the model that complement the contents of the tables and illustrate the Program’scomposition.

The type definition for the DomainDownload Programprecisely represents the behaviour of the Programin terms of UA components. These components can be browsed by a Clientto interpret or validate the actions of the Program.

Table A.3specifies the StateTypesassociated with the Transfer State Machine Type. All of these states are substates of the Runningstate of the base ProgramStateMachineType.

The Opening state is the preparation state for the domain download.

The Sending state is the activity state for the transfer in which the data is moved from the source to destination.

The Closing state is the cleanup phase of the download.

The Aborted state is the terminal state that indicates an incomplete or failed domain download operation.

The Completed stateis the terminal state that indicates a successful domain download. 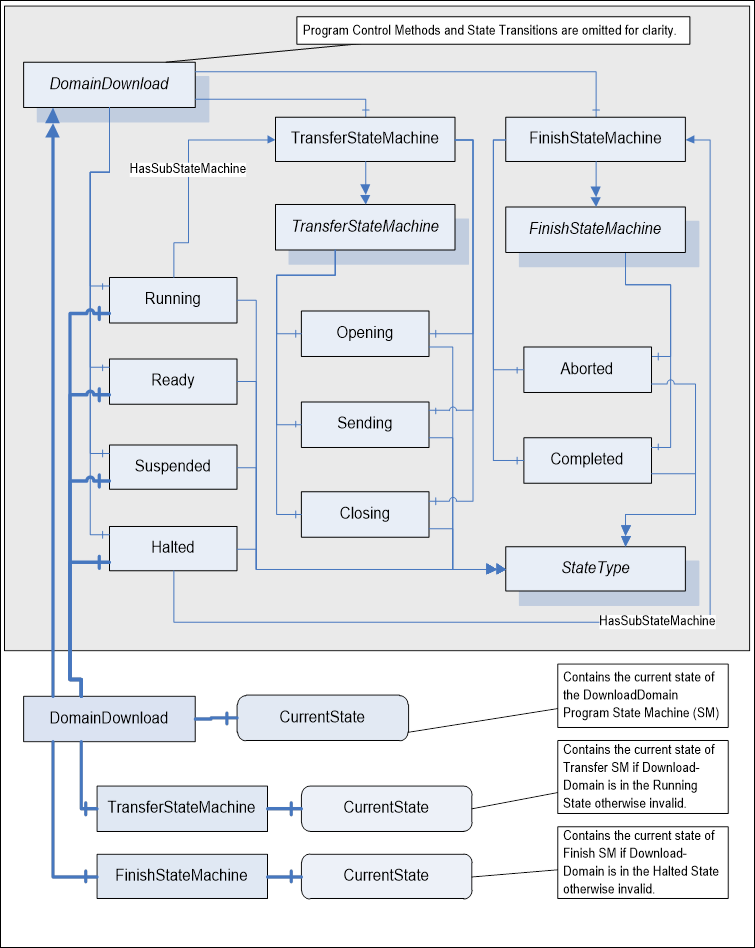 Figure A.4through Figure A.10illustrate portions of the DomainDownloadType model. In each figure, the referenced tates, Methods, transitions, and EventTypesare identified for one or two state transitions. Figure A.4– Ready To Running model

Figure A.5illustrates the model for the Opening To Sending and the Sending to Closing Programtransitions. As specified in the transition table, these state transitions require no Methodsto occur, but rather are driven by the internal actions of the Server. Eventsare generated for each state transition (10 to 12), when they occur. Figure A.5– Opening To Sending To Closing model

The model for the Running To Suspended state transition is illustrated in Figure A.6. The cause for this transition is the Suspend Method.The Clientcan pause the download of domain data to the control. The transition from Running to Suspended invokes the Eventgeneration for TransitionEventTypes5 and 16. Note that there is no longer a valid current state for the Transfer State Machine. 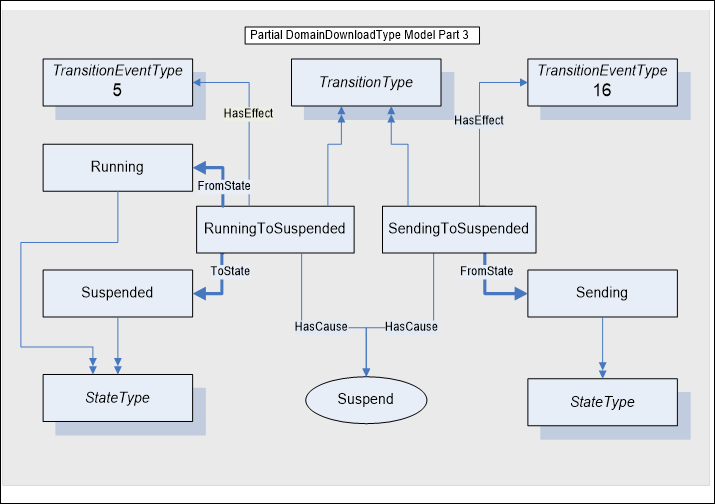 Figure A.6– Running To Suspended model

The model for the SuspendedToRunning state transition is illustrated in Figure A.7. The cause for this transition is the Resume Method.The Clientcan resume the download of domain data to the control. The transition from Suspended to Running generates the Eventfor TransitionEventTypes6 and 17. Now that the Running state is active, the Sending state of the Transfer State Machine is again specified for the CurrentStateNumber. 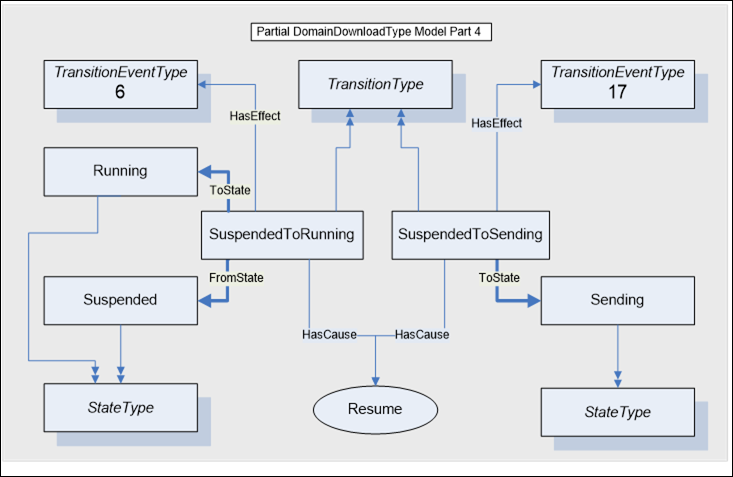 Figure A.7– Suspended To Running model

The model for the Running To Halted state transition for an abnormal termination of the domain download is illustrated in Figure A.8. The cause for this transition is the Halt Method.The Clientcan terminate the download of domain data to the control. The transition from Running To Halted generates the Eventfor TransitionEventTypes3 and 15. The TransitionEventType15 indicates the transition from the Sending state as the Running State ends and then to the Aborted state as the Halted state is entered. 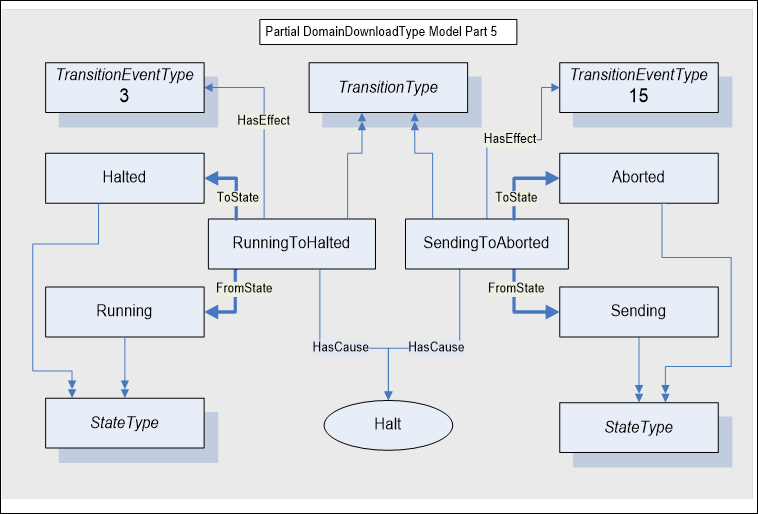 Figure A.9illustrates the model for the Suspended To Halted state transition for an abnormal termination of the domain download. The cause for this transition is the Halt Method.The Clientcan terminate the download of domain data to the control while it is suspended. The transition from SuspendedToHalted invokes the Eventnotifiers for TransitionEventTypes7 and 18. 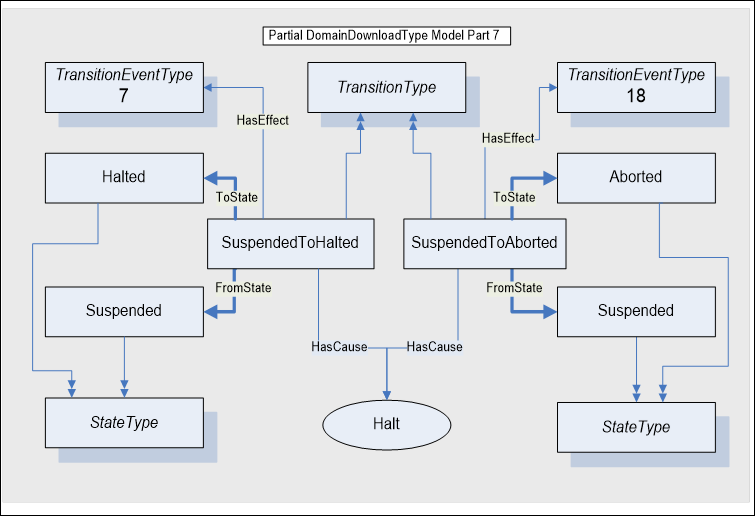 Figure A.9– Suspended To Aborted model

The DomainDownloadType includes a component reference to a FinalResultData Object. This Objectreferences Variablesthat persists information about the domain download once it has completed. This data can be read by Clientswho are not subscribed to Eventnotifications. The result data is described in Table A.13.

The Domain Download net transfer data rate and detailed reason for aborted downloads is retained as final result data for each Program Invocation.

DownloadPerformanceprovides the data rate in seconds for domain data transferred.

FailureDetailsprovides a descriptive reason for an abort. Figure A.10– Running To Completed model

A.2.6.3 Sequence of operations

Figure A.11illustrates a normal sequence of service exchanges between a Clientand Serverthat would occur during the life cycle of a DomainDownloadType Program Invocation. 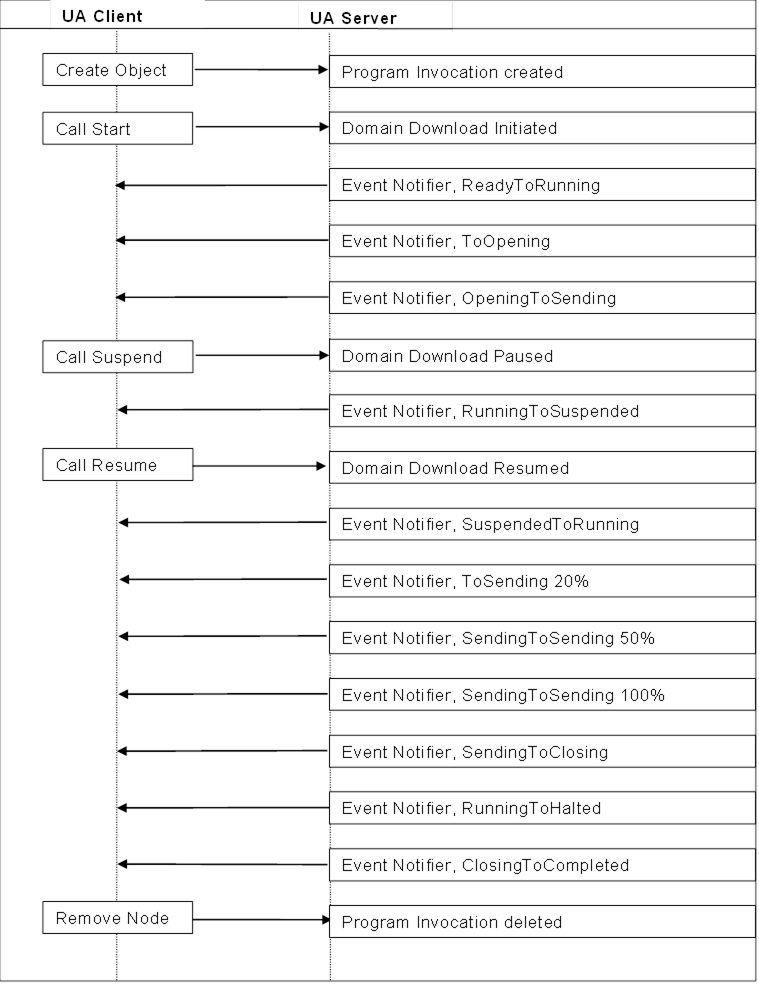 Figure A.11– Sequence of operations