7.4 Creation of Instances based on ObjectTypes generated out of IODDs

When an instance is created based on an ObjectType generated out of an IODD, two scenarios need to be considered.

In the second case all optional Objects, Variables and Methods are omitted and only the mandatory Objects, Variables and Methods are provided. Except for VendorID and DeviceID, which shall expose the configured DeviceID and VendorID on the IO-Link Port, all Variables cannot be read or written and all Methods cannot be executed. The server shall report a Bad_NoCommunication StatusCode in those cases.

In the first case the Conditions on the MenuRefs and ProcessData are evaluated and the Objects and Variables are only provided when they are referenced (either directly or indirectly) based on the Condition evaluation.

In case the raw value is changed in the Variable (offset and/or gradient are defined in the IODD), there shall be a Sub-Variable on the OPC UA Variable instance with the BrowseName “RawValue” providing the raw value from the IO-Link Device.

When the IODD provides default values for a Variable in OPC UA, and the server has not already read the value from the IO-Link Device, the default value should be provided with StatusCode Uncertain_InitialValue.

When the dataStorage attribute is defined and set to “False” in the IODD, the Method ParamDownloadToDeviceStore shall have the Executable Attribute set to “False”.

In Figure 22an example of an Object based on an IODD is shown.

Figure 22– Example of an Object based on an IODD

In Figure 23, an example of an Object based on an IODD is shown, where an IODD Variable is referenced by VariableRefs with different characteristics. 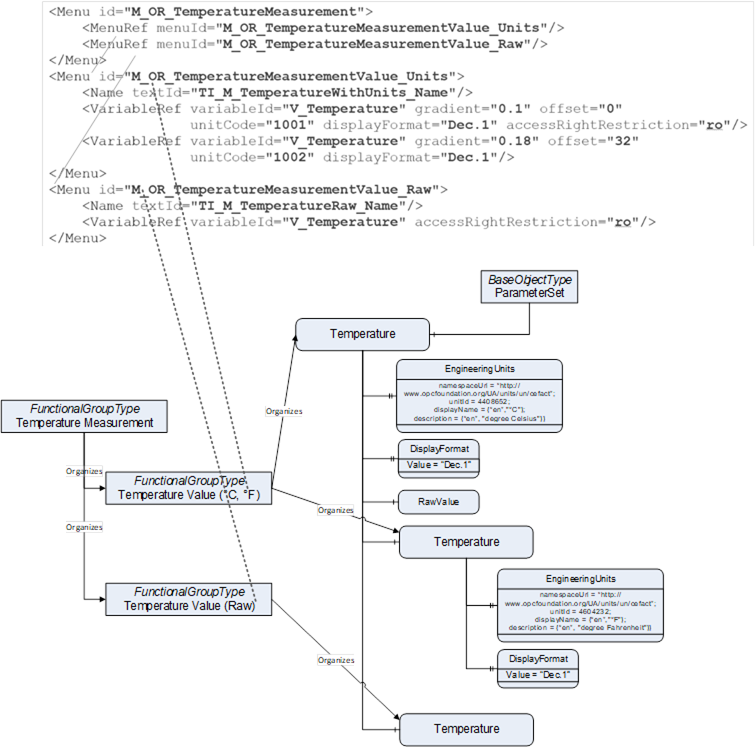