The SupportInfo Interface defines a number of additional data that a commonly exposed for Devicesand their components. These include mainly images, documents, or protocol-specific data. The various types of information is organized into different folders. Each information element is represented by a readonly Variable. The information can be retrieved by reading the Variablevalue.

Figure 8 Illustrates the SupportInfo Interface. It is formally definedin Table 26. 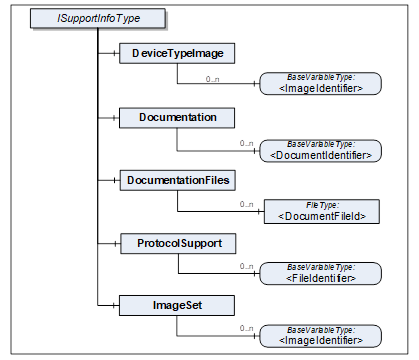 Clientsneed to be aware that the contents that these Variablesrepresent may be large. Reading large values with a single Read operation may not be possible due to configured limits in either the Clientor the Serverstack. The default maximum size for an array of bytes is 1 megabyte. It is recommended that Clientsuse the IndexRange in the OPC UA Read Service (see OPC 10000-4) to read these Variablesin chunks, for example, one-megabyte chunks. It is up to the Clientwhether it starts without an index and repeats with an IndexRange only after an error or whether it always uses an IndexRange.

The components of the ISupportInfoTypehave additional references as defined in Table 27.

Pictures can be exposed as Variablesorganized in the DeviceTypeImagefolder. There may be multiple images of different resolutions. Each image is a separate Variable.

All images are transferred as a ByteString. The DataTypeof the Variablespecifies the image format. OPC UA defines BMP, GIF, JPG and PNG (see OPC 10000-3).

Documents in many cases will represent a product manual. They may be exposed as Variablesor as FileTypeinstances. Files are useful in particular for large documents.

Protocol support files are exposed as Variablesorganized in the ProtocolSupportfolder. They may represent various types of information as defined by a protocol. Examples are a GSD or a CFF file.

All protocol support files are transferred as a ByteString. The BrowseNameof each Variableshall consist of the complete filename including the extension that can be used to identify the type of information.

Images that are used within UIElementsare exposed as separate Variablesrather than embedding them in the element. All image Variableswill be aggregated by the ImageSetfolder. The UIElementshall specify an image by its name that is also the BrowseNameof the image Variable. Clientscan cache images so they don't have to be transferred more than once.