The RecycleCount Propertyis an unsigned integer that specifies the number of times a Program Invocationof this type has been recycled or restarted from its starting point (not resumed). Note that the Reset Method may be required to prepare a Programto be restarted.

The InstanceCount Propertyis an unsigned integer that specifies the number of Program Invocationsof this type that currently exist.

The MaxInstanceCount Propertyis an integer that specifies the maximum number of Program Invocationsof this type that can exist simultaneously on this Server. If the value is less than 0, then there is no limit. 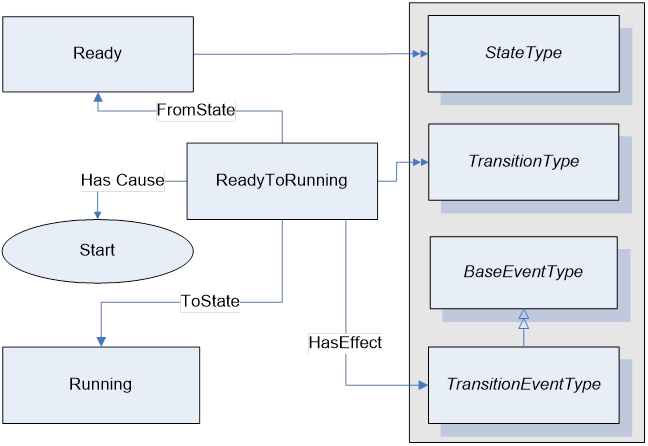 Figure 5illustrates the componentReferencesthat define the associations between two of the ProgramStateMachineType’sstates, Ready and Running. The complementary ReferenceTypes have been omitted to simplify the illustration.

The state Objectsare instances of the StateTypedefined in OPC 10000-16. Each state is assigned a unique StateNumber value defined in Table 6. Subtypes of the ProgramStateMachineTypecan add references from any state to a subordinate or nested StateMachine Object to extend theFiniteStateMachine.

TheHaltedstate is the idle state for a Program. It can be an initial state or a terminal state. As an initial state, the Program Invocationcannot begin execution due to conditions at the Server. As a terminal state, Halted can indicate either a failed or completed Program. A subordinate state or result can be used to distinguish the nature of the termination. The Halted state references four Transition Objects, which identify the allowed state transitions to the Ready state and from the Ready, Running, and Suspended states.

The Ready state indicates that the Programis prepared to begin execution. Programs that are ready to begin upon their creation may transition immediately to the Ready state. The Ready state references four Transition Objects, which identify the allowed state transitions to the Running and Halted states and from the Halted and Ready states.

The Suspended state indicates that the Program has stopped performing its Function, but retains the ability to resume the Functionat the point at which it was executing when suspended. The Suspended state references four Transition Objects, which identify the allowed state transitions to the Ready, Running, and Halted state and from the Readystate.

TheHaltedToReady transition specifies the transition from the Halted to Ready states. It may be caused by the Reset Method.

TheReadyToRunning transition specifies the transition from the Ready to Runningstates. It is caused by the Start Method.

TheRunningToHalted transition specifies the transition from the Runningto Halted states. It is caused by the Halt Method.

TheSuspendedToRunning transition specifies the transition from the Suspended to Running states. It is caused by the Resume Method.

TheSuspendedToHalted transition specifies the transition from the Suspended to Halted states. It is caused by the Halt Method.

TheSuspendedToReady transition specifies the transition from the Suspended to Ready states. It is caused internally.

TheReadyToHalted transition specifies the transition from the Ready to Halted states. It is caused by the Halt Method. 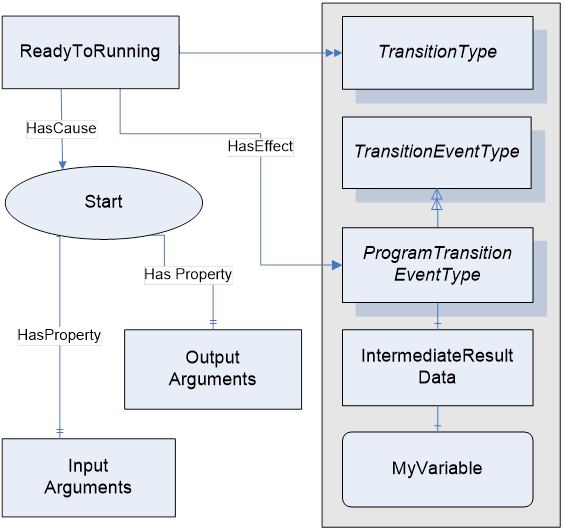 TheExecutable Methodattribute indicates if a method can currently be executed. For Program Control Methods, this means that the owning Programhas a current statethat supports the transition caused by the Method.

Methodscan reference a set of InputArguments.For each ProgramStateMachineType, a set of InputArgumentsmay be defined for the supported Program Control Methods. The data passed in the arguments supplements the information required by the Programto perform its Function. All calls to a Program Control Methodfor each Program Invocationof that ProgramStateMachineTypeshall pass the specified arguments.

The ProgramStateMachineTypeincludes component references to the Effects of each of the Program’sstate transitions. These EffectsareEvents. EachTransitionshall have a HasEffect Referenceto a ProgramTransitionEventType and can have anAuditProgramTransitionEventType. When the transition occurs, Eventnotifications of the referenced type are generated for subscribed Clients.The Program Invocationmay serve as the EventNotifierfor these Eventsor an owning Objector the Server Object may provide the notifications.

Table 10specifies the definition of the AuditProgramTransitionEventType.

This EventTypeinherits all Propertiesof the AuditUpdateStateEventType defined in OPC 10000-5, except as noted below.

The Status Property,specified in OPC 10000-5,, identifies whether the state transition resulted from a Program Control Method call (set Statusto ) or not (set Statusto FALSE).

The ClientUserId Property,specified in OPC 10000-5, identifies the user of the Clientthat issued the Program Control Methodif it is associated with this Program state transition.

The ActionTimeStamp Property,specified in OPC 10000-5“AuditEventType”, identifies when the time the Program state transition that resulted in the Eventbeing generated occurred.

This structure contains elements that chronicle the Program Invocation’sactivity and can be used to aid in the diagnosis of Programproblems.

Its composition is defined in Table 11.

Its representation in the AddressSpaceis defined in Table 12.

Note The original ProgramDiagnosticType VariableType had the same flaws as the structure. To avoid collisions with existing implementations, a new version with name ProgramDiagnostic2Type has been created.

The VariableTypeis formally defined in Table 13.