Conditionsare used to represent the state of a system or one of its components. Some common examples are:

Each Conditioninstance is of a specific ConditionType. The ConditionTypeand derived types are sub-types of the BaseEventType(see OPC 10000-3and OPC 10000-5). This part defines types that are common across many industries. It is expected that vendors or other standardisation groups will define additional ConditionTypesderiving from the common base types defined in this part. The ConditionTypessupported by a Serverare exposed in the AddressSpaceof the Server.

As mentioned above, Conditionsrepresent the state of a system or one of its components. In certain cases, however, previous states that still need attention also have to be maintained. ConditionBranchesare introduced to deal with this requirement and distinguish current state and previous states. Each ConditionBranchhas a BranchId that differentiates it from other branches of the same Conditioninstance. The ConditionBranchwhich represents the current state of the Condition(the trunk) has a NULL BranchId. Servers can generate separate Event Notifications for each branch. When the state represented by a ConditionBranchdoes not need further attention, a final Event Notificationfor this branch will have the Retain Propertyset to False. Clause 4.4provides more information and use cases. Maintaining previous states and therefore the support of multiple branches is optional for Servers.

The base Conditionstate model is illustrated in Figure 1. It is extended by the various Conditionsubtypes defined in this standard and may be further extended by vendors or other standardisation groups. The primary states of a Conditionare disabled and enabled. The Disabledstate is intended to allow Conditionsto be turned off at the Serveror below the Server(in a device or some underlying system). The Enabledstate is normally extended with the addition of sub-states. 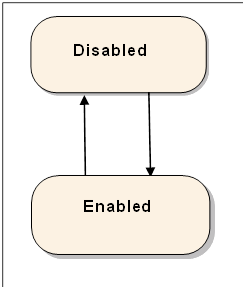 A transition into the Disabled state results in a Condition Event however no subsequent Event Notificationsare generated until the Conditionreturns to the Enabled state.

When a Conditionenters the Enabled state, that transition and all subsequent transitions result in Condition Eventsbeing generated by the Server.