Figure 1depicts the main ObjectTypesof the base device model and their relationship. The drawing is not intended to be complete. For the sake of simplicity only a few components and relations were captured to give a rough idea of the overall structure. 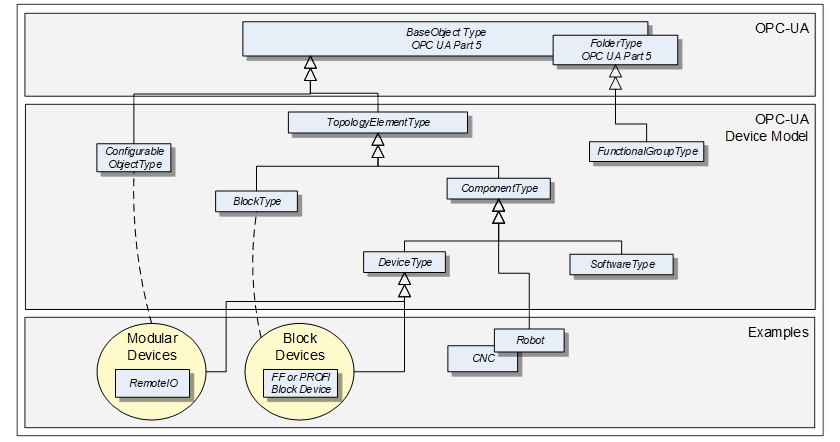 The boxes in this drawing show the ObjectTypesused in this specification as well as some elements from other specifications that help understand some modelling decisions. The upper grey box shows the OPC UA core ObjectTypesfrom which the TopologyElementTypeis derived. The grey box in the second level shows the main ObjectTypesthat the device model introduces. The components of those ObjectTypesare illustrated only in an abstract way in this overall picture.

The grey box in the third level shows real-world examples as they will be used in products and plants. In general, such subtypes are defined by other organizations.

The TopologyElementTypeis the base ObjectTypefor elements in a device topology. Its most essential aspect is the functional grouping concept.

The ComponentType ObjectTypeprovides a generic definition for a Deviceor parts of a Devicewhere parts include mechanics and/or software. DeviceTypeis commonly used to represent field Devices.

Modular Devicesare introduced to support subdevices and Block Devicesto support Blocks. Blocksare typically used by field communication foundations as means to organize the functionality within a Device. Specific types of Blockswill therefore be specified by these foundations.

The ConfigurableObjectTypeis used as a general means to create modular topology units. If needed an instance of this type will be added to the head object of the modular unit. ModularDevices, for example, will use this ObjectTypeto organize their modules. Block-oriented Devices use it to expose and organize their Blocks.